Hearing Issues and Solutions for Seniors

Due to technological advancements, today’s hearing aids do an excellent job of helping people meet many of their communication needs. However, sometimes there are situations where additional technologies may be needed.

Some hearing aid users may continue to experience difficulty understanding speech in noisy environments, when watching TV or attending a movie or play, or while listening on the telephone. At bedtime, a person with even a mild to moderate hearing loss may not hear the smoke alarm located down the hall. This same person might miss a doorbell chime while listening to the TV.

Alerting devices can be purchased individually to warn a person of a specific event or as complete systems that warn a person of a variety of events. For example, someone living in a one-room studio apartment might need just a simple device that flashes a single light when someone presses the doorbell or knocks on the door, whereas another individual living in a large house with many rooms may need a system that triggers flashing lamps in every room of the house when the doorbell is 1 V) iiri pressed, the telephone rings, or the fire alarm is lights (e.g. five flashes for the doorbell vs. activated. Some systems use coded flashing one flash for every time the phone rings) whereas others use a vibrating body-worn pager that vibrates and displays a number corresponding to the event.

There is usually a base unit that has its own outlets in which you can plug in a lamp and a bed shaker. If a lamp is used for alerting, it can be used for regular lighting as well and will flash regardless if the light appears on or off. Some systems use their own special lamps or strobe lights.

There are many alarm clocks and timers available with adjustable volume and pitch, flashing light, or vibration. There are also several wrist watches available that use vibration as an alarm, on the hour alert, medication reminder or countdown timer.
Assistive Listening Devices Auditory assistive listening devices can be thought of as “binoculars for the ears.” These devices bring the desired sound “closer” to one’s ear(s) before it has a chance of being mixed with noise and reverberation.

Assistive Listening Devices
Auditory assistive listening devices can be thought of as “binoculars for the ears.” These devices bring sound “closer” to one’s ear(s) before it has a chance of bring mixed with noise and reverberation. 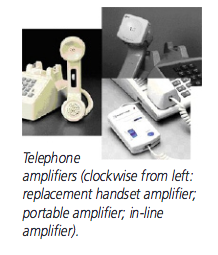 The ability to hear a telephone ring will depend on a number of factors such as the severity of the hearing loss, the frequency of the telephone ring and the distance from the telephone to the person. There are a few different types of telephone amplifiers to attach to a regular telephone as well as a wide variety of available amplified telephones. Amplified telephones come in both standard and wireless models and most have options for volume, pitch and pattern as well as a small flashing light to indicate the phone ringing. Very often, a lower pitch ring can make it easier to hear. If the hearing loss is severe, there are devices that will cause a light in the home to flash, a body-worn unit to vibrate, or a bed shaker to vibrate when sleeping. For those that use a hearing aid, it is important to consider hearing aid compatibility. When a telephone is noted to be “hearing aid compatible,” this means that the ear piece of the phone emits a magnetic field. If a hearing aid is equipped with a telephone coil or “T-coil,” this coil is able to respond to the magnetic field, allowing the hearing aid to pick up and amplify the voice from the phone directly. This also blocks surrounding sounds while the individual uses the telephone. The T-coil feature may also be used with a variety of assistive listening devices. Telephone amplifiers (clockwise from left: replacement handset amplifier; portable amplifier; in-line amplifier).

Many cell phones will note that they are hearing aid compatible. In addition, most cell phones can be used with a cell phone amplifier as well as have a text message option. For those who cannot understand over the voice telephone, even with amplification, there are other options such as the “voice carry over” (VCO) or “read and talk” telephone. Used with the telephone relay service, VCO allows you to talk directly to the other party while an operator translates what the other party says to you into print that is displayed on a small LCD screen.

TTYs are small typewriters that allow two individuals to communicate with one another over a standard telephone line by typing text back and forth. When one party does not have a TTY, a relay operator acts as the typist during the conversation. TTYs are available with memory and answering machine capabilities. These TTYs can store conversations as well as greeting messages. In addition, some TTYs have a built-in printer that can print the conversation as it proceeds. There are also portable TTYs available that have direct connect and can be used with cell phones. The Federal Communications Commission (FCC) has implemented the toll free phone number of 7-1-1 for access to all Telecommunications Relay Services (TRS). TRS permits deaf or hard of hearing individuals to use the telephone system via a TTY or other device. 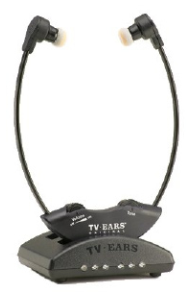 For many individuals, the frustration associated with watching television may simply be one of distance. As one listens to a TV from a distance, not only does the sound signal become weaker as it travels from the television to the ears, but the acoustical characteristics of the room make the sound less distinct. Some TVs come with jacks into which an earphone or a transmitter can be plugged. There are many other options including various wireless transmitters and receivers. Theater, Cinema or House of Worship — Wide Area Systems Most hearing aid users have a difficult time understanding conversation when in a noisy environment. There are a few ways of dealing with this. Some hearing aid users are able to plug an extra microphone into their hearing aid(s). The hearing aid must be equipped with either a “telecoil” or a feature called “direct audio input” (DAI). DAI allows very tiny FM receivers to be plugged into the bottom of the hearing aid. For others, wireless headsets are usually available at theaters. Some individuals choose to buy their own headsets or receivers to be used at home as well. In addition to various listening systems, some movie theaters and live theaters also present special performances or showings that are captioned.
Places to Purchase Hearing Loss Support Devices

Below are just a few examples of places to purchase hearing loss support devices.

Along with providing the stress-free companionship of someone who understands hearing loss, Relevar Home Care can help someone with hearing loss to remain independent and stay safe within his or her home and daily environment. Call (888) 493-3513 for more information or to set up a free in-home consultation.

Click the links below to access resource websites to learn more about hearing issues and solutions for seniors.

Center for Hearing and Communication
This site contains a wealth of information for all audiences on hearing loss.